In the wake of the Election I need to come with another blogpost.  Now we have maneuvered through the Election Period in a nice fashion and need to look forward. 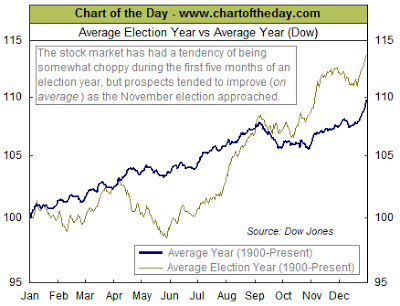 In the chart above you can see a typical Election Year with a rally post election.  Will we get such a year, like we had after Obama won in 2012.

Pre election there was a lot of talk of a rally with a Clinton victory.  Trump was behind in the polls and the market was somewhat certain of a Dem win.

As everybody knows Donald Trump won a surprise victory.

Even I have to say I am less certain of a market rally after the election result.  But can we thrust the chart above.

A 10 day Election chart. You can see the election short term rally and the sideways trend since Friday.  The Market looks for direction.

What to do in this situation?  Wait out the market for its new direction. There is a higher probability for a rally, but wait and see what happens. There is ample time to buy in if a rally.

Next in line is the December meeting of the FED and a possible rate hike. With a possible new period of a hesitant market.  I will come back to the next FED occasion.

Look for the markets new direction.  It is not a situation to rush into the market. Do not forget one of the most important traits of an investor, patience. But if you see the market start running be sure to jump in and ride the market Bull.