We have come to the start of the year 2017 with a lot of new possibilities in the marketplace.  2016 became a good year and we all ask us will 2017 be a new such year.

In this illustration you can see the market pre and post the Presidential Election.  We did well to foresee this rally.  We can also see a sideways trend since mid December.  Is the Trump rally over?

A month ago we asked us the question if there would be a New Year rally, out of the chart we can see not much so.  Has the momentum gone?

What I see out of the chart is a big Trump rally with a lot of excitement and somewhat of a sell down the last month.

These are the FANG stocks: Facebook, Amazon, Netflix and Alphabet.  They are some of the largest companies in the world.  As you can see they have started 2017 in a nice fashion.  In average an 8 % return.  These are stocks worth watching as a long term investment.  Pick your own personal favorites. 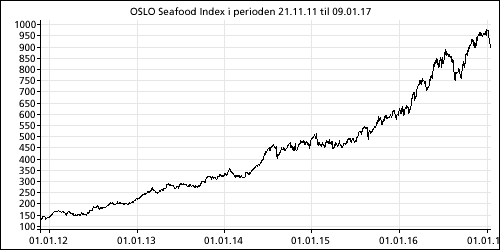 Did you read my Seafood stocks blog posts.  As you can see one of the great industries, the index rallied from 150 to 900 in 5 years.  I give this long term chart to show we still have a nice upwards trend.  The industry has its best period ever with skyrocketing salmon prices. 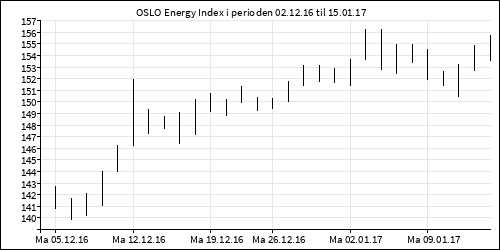 The Norwegian energy stocks since the OPEC cut deal.  The index up 15% in little more than a month.  This is still an industry worth watching.  Somewhat of a selling pressure in oil in the New Year stabilizing the oil price. But there may be more rallies to come.  If the oil price starts picking up again which there is a pretty good chance of.

Now we have to ask us if the Trump excitement will continue in the New Year.  He has promised substantial economical growth and policies to support such a growth.  Growth good for stocks as we know.

Be sure to follow when the present sideways trend breaks.  The initial Trump rally gave me a positive forward look but let the market be the judge.  Another exciting year in front of us.  Good luck forwards with investments and trading.