I stumbled upon a chart on Marketwatch, a chart over the best stocks since the depth of the Financial crisis.  I came up with an idea to try to tell which stocks to focus on in a bull market.

On a prior blog of mine, which I started October 2010, I tried to come up with stocks worth watching. 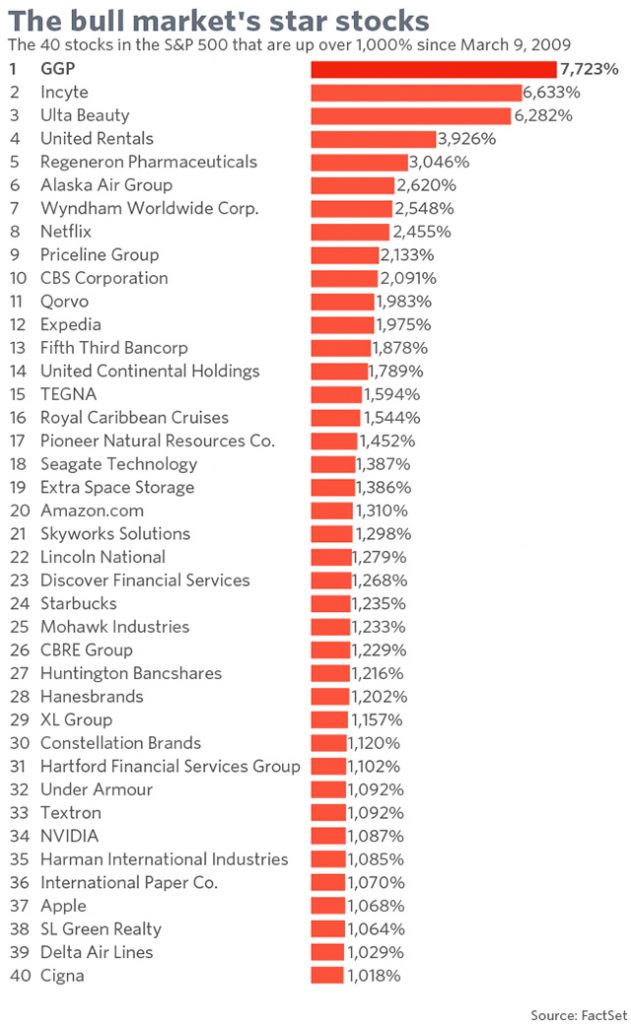 In the illustration above you can see the best stocks since the bottom of the Financial crisis.  On a prior blog of mine in 2010-11 I started covering some of these stocks.

Amazon, Apple, UAL & Royal Caribbean Cruises I presented 6-7 years ago.  Why did I focus around these market winners.

In a financial crisis stocks like UAL & RCL are down cause of the general market situation and bookings on the weak side.  I believed back in 2010 the economy was improving and looked for stocks with a great potential in the improving economy.

From my long market experience the airliner UAL and the cruise co RCL pointed themselves out.  These stocks I believed would really benefit from the emerging bull market.  Glad I presented the stocks as you can see from the illustration above.

Amazon I have always believed in as a growth case.  This has  been a favorite of mine since the 90’s.  Happy this was one of the first stocks I presented as a blogger.

Apple has been a real performer for a long time.  I came up with the co in 2010 cause I believed in its products like the IPhone.  Apple products were among the coolest around.

My main point with this post is when an improving economy as we had in 2010 try to come up with stocks really down cause of the crisis.

I really hope some of my readers back in 2010-11 invested and cashed in.